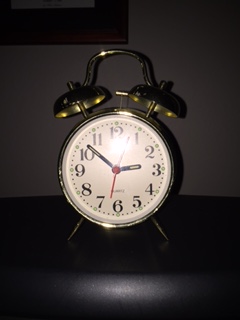 (The Conclusion  of a 6-part story)

How had things gotten so messed up? I went to the refrigerator and poured myself a cola, and then grabbed my morning chocolate bar. I picked up the two bottles of pills and read the labels again. “Take one tablet by mouth every day.” One for nerves, one for depression. When did I get so nervous? We had plenty of money. The kids were all out of the house and in school. This was supposed to be a great time in our lives, with time to ourselves again. Instead, my friends were mad at me and my husband was spending the weekend in Boston without me. And I was on medication for depression? I didn’t feel hopeless. I hadn’t lost my enthusiasm for the things I loved to do. I was simply having trouble sleeping. It all had to do with sleeping.

I closed my eyes and tried to concentrate. What was I going to do? The pills were making it worse, not better. And I couldn’t help but think that I really didn’t need them, there was something else going on.

When I opened my eyes, the first things I saw were the cookbooks, diet and health books I kept on the corner shelf. One book in particular caught my eye. It was a book about using different types of foods as a remedy for a health problem. What would it say about sleeplessness? I wondered, as I reached for the book.

Fifteen minutes later, I got up from the table, poured out my cola and threw away the chocolate bar. In that small bit of time I already had a good idea what my problem was. Too much caffeine. I had been filling up my body with cola and chocolate, both full of caffeine. If my body had sensitivity to caffeine, even a small amount of it any time during the day might prevent me from being able to fall asleep, or from sleeping through the night. I read about how natural ingredients in milk and other dairy foods, and potassium-rich foods like bananas can help your body slow down and prepare for sleep. These foods affected the levels of serotonin and melatonin in the body, both of which are essential for restful sleep.

It seemed unbelievable. I had spent hundreds of dollars on medical tests and prescription medicines, yet things weren’t getting any better. Could it really be as simple as cutting colas and chocolate and other caffeine-filled foods from my diet?

I made a list of the food suggestions to help sleep problems, and noted I should eat something small just before bed, something dairy or something starchy. Permission to have a bedtime snack.

I learned caffeine can stay in your system for 6 to 8 hours. That meant having either chocolate or coke after 2 p.m. could make it hard to go to sleep at 10 p.m.

I went to the pantry. I looked at the 12 packs of cola and the stacks of chocolate candy. Was it possible I was doing this to myself? Had I been doing it to myself for years?

I was willing to try anything now. My marriage and my job were at stake, as was a friendship I cherished. I put all the chocolate bars in a plastic bag and set them on top of the refrigerator. Then I moved the 12 pack of cokes out to the garage. Out of sight, out of mind might not work when my cravings hit, but this was a beginning. I would take the candy and cola to work Monday and let the other employees devour them while I tried to save my job.

But first on my heart and mind was saving my marriage. Was it really in trouble? Was it really possible that Dan was fed up with me and ready to call it quits? He had accused me of having an affair. But he knew me better than that; I felt sure he knew I would always be faithful. He’s a history buff, I could imagine him walking Boston’s Freedom Trail on Saturday, and sitting in some Irish pub Saturday night. Without me.

I called directory assistance in Boston for the hotel’s phone number and caught Dan in his hotel room.

“Honey, I’d like to come up for the weekend. I think I’ve got this thing figured out, and I’d like to talk to you about it. It would be a great weekend getaway, and I really want to share it with you. Sound okay?”

Dan insisted on calling his travel agent to get me on the first available flight. Then I called my doctor.

She took the time to listen as I explained what I had not told her during my appointment. She agreed that what I was eating could be a big part of my sleep problem. I had expected her to argue with me about not completing the prescriptions, and rant about self-diagnosis. But she agreed that I didn’t give her all the facts, and in that visit I hadn’t been willing to discuss what I’d been eating and doing to my body to cope with this night time problem. As we reviewed the situation, and I came clear about my cravings and bad food habits, she agreed that I should try a weekend without the meds, and without caffeine of any kind.

I’m going to give it a try, and see if it helps. I’ll do whatever it takes to get my body healthy again. There’s simply nothing like a good night’s sleep.

(This story, “I Haven’t Slept in Years” is from my short story anthology, Naked Ladies: Seasons of the Heart, available through Amazon. The book page is found at  http://tinyurl.com/kfa4ung.)