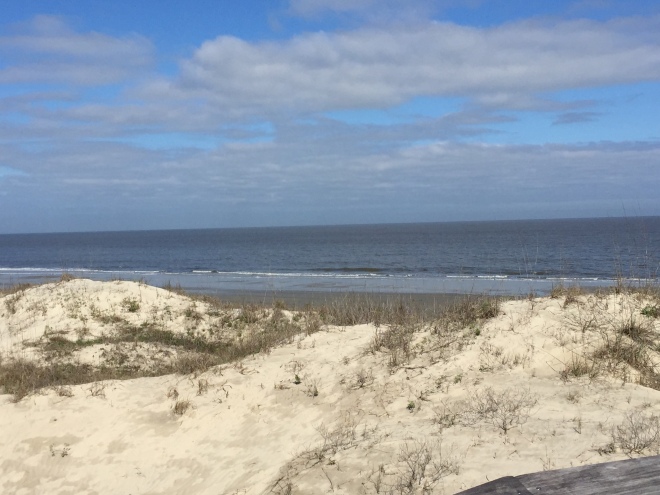 When the sun rose on Acapulco Monday morning, the third day of my married life, I rolled out of my honeymoon twin bed. First, I leaned over the other bed to make sure Chad was still breathing. He was. But when he awoke, a few minutes later, he dashed for the bathroom. I listened for the sound of vomiting, and heard none. The look on his face and the smell exuding from the bathroom when he later emerged, told me the story of his current condition. He pulled the covers up over his head and went back to sleep.

I had the whole day to myself.

Actually, it was a good day. I walked the beach and picked up shells. I sat poolside, slathered with baby oil to magnify the sun’s rays (forty years later, I curse that foolishness) and drank a Pina Colada (or two, or three). I napped. I dined on fresh pineapple, mangoes and coconut. I sat on a beach towel in the shade of a palm tree on a stretch of beautiful beach behind the resort and read a book. In short, I had a perfectly relaxing peaceful day in Paradise.

Now, if Chad would just get over his case of food poisoning – or Montezuma’s Revenge – so that we could enjoy the honeymoon together.

By suppertime, Chad said he felt much better. I wondered what it was he had eaten that I hadn’t. Not that it mattered. I was glad I was not sick. He still wasn’t very hungry, although he did sit with me while I ate fish tacos for my meal. I filled him in on the upcoming activities for the week. After he approved the suggestions, I confirmed our Jeep rental for the following day as well as my morning Scuba lessons in the hotel pool.

We spent the second night of our honeymoon in our respective twin beds. (Sigh)

Day Three – Acapulco (The Calm Before the Storm)

Again, I woke over and leaned over Chad to check his breathing. He was alive, but he wasn’t awake. He didn’t want to be kissed. He didn’t want to get up. He was feeling 85 percent normal, but he was not, nor would he ever be, an early riser. I, on the other hand, felt I was ‘burning daylight.’

I put on my swimsuit and pulled on shorts and a tee, grabbed my beach towel and started the day, promising to meet him at noon for lunch, and an afternoon of Jeep driving.

Time for Scuba lessons in the clear, sparkling water of the resort’s swimming pool. I was nervous about learning the techniques, I was claustrophobic. My fear of small, enclosed spaces included elevators, closets, windowless rooms and even parking garages. I had anticipated feeling that way under water, and because of it had been nervous about learning the techniques. My teacher quickly put my fears to rest. I was hopeful the actual Scuba experience the next day would be as much fun as the lessons.

Chad appeared for lunch, ready for our afternoon drive. At the Jeep rental place, we checked out our rental, a slightly battered red Jeep. I wasn’t too sure about the rag that had been stuffed into the mouth of the gas tank, but was assured that it did as good a job as the cap (which had been lost by some careless tourist.) The rental operator gestured the direction we should go to find roads leading to beaches, and off we went for three hours of exploring, including a search for a private beach for sunbathing.

The good news is, we didn’t get lost and no one set the gas-drenched rag on fire and blew up the Jeep. We returned the vehicle on time, and attended the fabulous production of the Acapulco cliff divers. These adrenaline junkies dove with flaming torches in their hands down into a narrow gorge at just the right second when the waves crashed in, giving them enough water to dive into without cracking their skulls. (Versus the scanty four feet of water in the gorge when the tide was rushing out!) Whew!

A good day, at last, and more what I had in mind when I thought of Acapulco. Unfortunately, my honeymoon experience was about to take a turn for the worst, again.

(Come back next week for the three remaining installments of “Honeymoon From Hell.”)